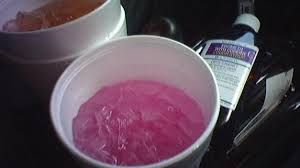 When battling a nasty cough or cold, we often rely on prescription cough syrup to help us feel better. A disturbing trend has led young adults to seek out these same medicines for something very different than relief from a cold.
Teens and young adults are using cough syrup with codeine, which is a potentially addictive substance, and mixing it with Jolly Ranchers and their favorite soft drink, like Mountain Dew or Coca-Cola, to get high. This cocktail is referred to as “Sizzurp.”
Sizzurp is also known as “Purple Drank,” “Purp,” or “Lean.” It is glorified in rap songs in mainstream pop culture. The cough syrup cocktail has gained popularity since the early 2000’s with rapper/producer DJ Screw referencing it in songs. The songs contain slowed-down woozy-sounding beats that mimic the high of drinking Sizzurp.
Drinking large amounts of Sizzurp can produce a feeling of euphoria, extreme relaxation, and wooziness. The side effects are impaired motor skills, lethargy and drowsiness caused by the codeine. The drink can have fatal effects when combined with alcohol. An overdose of codeine can result in cardiac or respiratory arrest, which greatly increases when mixed with alcohol.
Teens falsely believe that because the medication is available from the pharmacy, it won’t harm them. When not used as directed, cough and cold medicines - even over the counter ones - can be dangerous.
Parents Can Help
Parents can keep their kids safe by doing the following:
Talk to your kids-educate them on the dangers of using cough syrup to get high. Let them know your expectations. You are the most powerful anti-drug.
Keep medications locked up and always make sure to properly dispose of leftover prescriptions when you are done with them.
Get help. If you want more information, or think someone you know may have a problem call Jackson Recovery Centers at 712-234-2300.